Looking Back – 1 Year ago

It was a day much like today, we didn’t know how much our world could change within minutes but it did.  One year ago today marks the anniversary of the fire that destroyed our home. 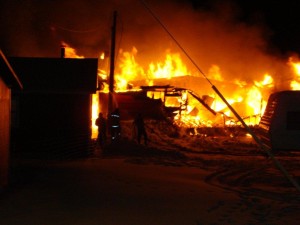 Night of the Fire. I remember William yelling back to the bedroom, get Cody and Get Out! I grabbed my phone (nightstand), boots (closest shoes to the door), and ran to get Cody and his one little blankie and met William and Nora outside. Scariest Night of my Life.

Well lets not focus too much on the past, I think it is important to always remember the past but not to dwell on it.  A couple months after the fire we had really begun the research process of house building (again…ugh), someone asked me, “When do you expect to be in the new house?”  Mind you, we hadn’t even decided on plans yet.  I replied, “September, the end of September.”  I was just positive that we could get it done (also I was positive that The Rancher and I both had superhuman powers to accomplish all that had to be done between my job, the ranch, the house, kids and everything else).  Well, needless to say, The Rancher caught wind of my new timeline for him and informed me there was, “No way in h*ll that we would be able to get that done.”

POP! phewwwwwwww! – – – that is my ballon (the only sense of sanity I had) being popped right then and there.

Valentine’s Day 2014 – In Bismarck after the fire. Grandma Gerry got the kids Balloons

So new goals were set, and I said to The Rancher – NO MATTER WHAT, WE WILL BE LIVING IN THE NEW HOUSE WITHIN A YEAR.   AH HA!  There was an attainable goal, and we did it! 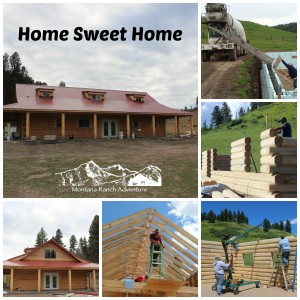 And it is everything we could have hoped for! A lot of hard work, but it is ours – build by us, designed by us, live in by us!

Now I keep promising you all a video tour, and I keep trying I really do.  But let me be completely honest.  There is no way with my two toddlers, husband and the mud we are dealing with that I can even attempt to make the whole house clean at one time.  (Unless someone wants to volunteer to babysit the kids at their house :P).  So, I will be working on getting pictures (and good ones at that), for all of our supporters, family, friends to see the house.  We are expecting lots of visitors this summer so be sure to put us on our vacation plans!

1 Responses to Looking Back – 1 Year ago