You never know what life will throw you!  Yesterday and old friend from my rodeo world tried to stop and see us.  He got stuck on the mountain (wish I would have had my camera), we tried to pull him out, it got worse, ended up 4 hours later with a tow truck to get him out, What a wreck.  He stayed at the bunkhouse last night and we got to catch up which was wonderful.  He was on his way home from a job where he has been stationed in Texas and trying to get back to Wall, SD but he had to fly to Billings, MT because that is where his home base is.  Check out this great song that some gentleman did in the Dallas airport where they were stuck because of flight delays!  Gotta love a capella music!

Expect the unexpected in every situation and in everyday!  And make the best of it, like the gentleman on the video said….when life gives you lemons….SING!  Well I’m no singer but you get the idea!  We are so thankful that our friend wasn’t hurt while his car was doing a 360 on the mountain where either side would have been a terrible situation if he would have went off!   We all made the best of the nasty situation (of which, it is STILL SNOWING on the mountain, its truly beautiful).

This morning my daughter pointed out to me this: 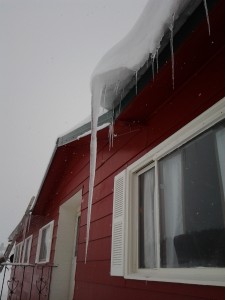 Got Ice?  We do!  This icicle is perfect and is over 4 foot long!  You have to walk around it.  We should probably take it down for safety factors!

2 thoughts on “Expect the Unexpected”